Introduction
Indrani Saptashati, is a poem containing seven hundred verses in the praise of Indrani, the consort  of the paramount Lord Indra of the Vedas. This was composed by Sri Vasishtha Ganapati Muni in 1922, while he was doing tapas in the Mango tree cave on the mount of Arunachala, in Tiruvanna Malai, Tamilnadu. Although, it was summer, and the sky was cloudless – bright with sunlight, at the time of composition of the seven hundred verses, every evening there appeared in the sky flashes of lightning, indicating the very presence of  Indrani – the great vajra-vairocani Shakti of Indra. This stotra was later revised and the final version of the text was completed much later by the Muni in March 1931, during his stay at Sirsi in North Kanara District. He removed many verses from the original text, added new verses, and amended a few.
The Muni composed this grand poem in seven different metres used in the Vedas – gayatri, ushnik. anushtubh, brihati, pankti, trishtubh and jagati. These verses are distributed over seven shatakas (a century of verses) – each shataka composed in one of the seven Vedic metres. A shtaka is further divided in to four parts with twenty-five verses in each.
Each verse of this stotra reflects the glory of the Goddess Indrani. Here the seer-poet has reconciled Indra of the Vedas with Maheshwara (the great controller) of the Tantras. In this stotra many of the secrets of the Vedas, Yoga and Mantras have been revealed. It is interesting to note that in this saptashati, goddess Renuka, the mother of Parashurama (the sixth incarnation of Lord Vishnu), Draupadi (a character in the Mahabharata), and Mary, the mother of Jesus Christ (who came to this world to expiate for the hurdles of sins of the entire mankind) have been specially extolled as the three incarnations of the great Divine Mother – the Maha Shakti.
In the first invocatory verse of each stabaka the alluring smile of the Divine Mother is praised and in the second verse of the same stabaka, the poet prays the goddess to protect this land of Bharata. In the twenty-fourth verse of every stabaka, the poet seeks for grace of the Divine Mother to be an instrument in the immense task of serving his country in order that it regains its past glory. In the twenty-sixth stabaka, (where all the verses are written in a metre called jaloddhata-gati) the Muni by using the refrain rokEc pj.ka oztkfe ‘kj.ke~ – O mother, I seek refuge in thy feet, prays again and again to the goddess Indrani for the upliftment and protection of  his country at this juncture when all human efforts are not enough to release her from the bondage of darkness and inertia.
In the last verse of every stabaka, the name of the metre, in which the verses of that stabaka are composed, is mentioned. The saint-poet followed this style in each of the twenty-eight stabakas. In the second stabaka, Indrani is praised in the form of space (ether) in a marvelous manner. The ninth stabaka has the ultimate Reality as its subject matter. In the eleventh stabaka, the poet has described various Upanishadic vidyas, with great poetic beauty. In this highly fascinating poem every reader is sure to be entertained by its poetic excellence where there is an effortless play of alliterations.

CLICK HERE to read the verses of Muni's prayers to Indrani for the protection of Mother India.

Here we give the Tamil Translation of Umasahasram done by Sri Viswanatha Swami.
We are thankful to  Smt. Bhuvaneshwari Shankar, w/o Shri N. Shankar and daughter in law of Late Shri K.Natesan, for preparing the document.

-Sampadananda Mishra
Posted by Unknown at 22:51 No comments:

Dear Freinds,
You will be happy to know that the English translation of UMASAHASRAM of Kavyakantha Ganapati Muni is now available online. Please CLICK HERE to avail it.
Posted by Unknown at 21:51 1 comment:

Dear All,
The Tamil transliteration of Uma Sahasram, prepared by Smt. Bhuvaneshwari Shankar, w/o Shri N. Shankar and daughter in law of Late Shri K.Natesan, was released on December 1, 2013 by Shri V.S.Ramanan, President, Ramanashramam, Tiruvannamalai as an offering on the occasion of Birth centenary of Late Shri. K.Natesan.


We give here the entire text: Umasahasram of Vasishtha Ganapati Muni in Tamil Script.


Eventually we will be uploading the Tamil Translation of the same. Keep visiting the page.

thanks
Sampadananda Mishra
Posted by Unknown at 23:10 No comments:

Introduction to this Blog 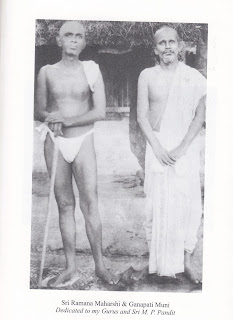 This blog is entirely dedicated to Vasishtha Kavyakantha Ganapati Muni, the first and foremost disciple of Bhagavan Ramana Maharshi, a seer poet, philosopher, patriot, visionary who was born on 17th of November 1878 and left his body in 1936. This blog is maintained by me (Sampadananda Mishra, Director, Sri Aurobindo Foundation for Indian Culture, Sri Aurobindo Society, Pondicehrry). You can contact me at <sampadanandamishra@gmail.com> for further information.

It was in the year 2002 that I came in contact with Sri Natesan. Till then I knew Vasishtha Ganapati Muni only as the author of Umasashasram and the guru of Sri Kapali Sastri, who later came and settled in Pondicherry as a disciple of Sri Aurobindo. I had also heard about the Muni as an Ashtavadhani who could simultaneously attend to eight different questioners and reply to them through extempore poetry. But I had no idea about any other writings of the Muni. It was only when I came into close contact with Sri Natesan, who had preserved all the works of the Muni by copying them in his own note books,  that I learnt about the other writings of the Muni. I found that the Muni has written extensively in Sanskrit on a wide range of topics. And his style, diction, language and use of various poetic devices are unique.

For Sri Natesan it was a dream or life's mission to see all these works in print. So he had started giving thought to publishing all the works in several volumes. It was during this period that my contact with him took place. We then sat together to decide the layout and format of the volumes. The work which he had started much before he met me now began to take shape. This is how editing and publishing the twelve volumes of the 'Collected Works of Vasishtha Kavyakantha Ganapati Muni' took place. I was fortunate to be a part of this Divine work and it was an enriching experience for me to work as the associate editor of the Collected Works of the Muni. Sri Natesan was so particular about the accuracy that he would go through and verify each and every letter that was put into the computer. We used to sit together to proof read the texts and most of the time I found that when I was reading the text on the screen he was sitting with his eyes closed instead of looking at his note book. If there was any mistake he would immediately point out from his memory. It always seemed to me that all that has been published in the eleven volumes of the Collected Works of the Muni was committed to memory by Sri Natesan. That was his uniqueness.

I remember when we were trying hard to bring out the first volume, one day Sri Natesan told me why the work was getting delayed, and he expressed his wish to see at least one volume in print before leaving his body. When he told me this in the year 2003, he was ninety years old. I then spontaneously told him, "Please do not tell me that Sir, you have to live and you will surely live to see all the works of the Muni in print form. Without your presence the work will not move at all." In the year 2009, six years later, when a copy of the eleventh volume was put in his hand, he asked, "How much work is left to be done?" When he was told that that was the last volume of Muni's original writings, he expressed the desire that since everything was over he should leave his body. It thus happened, that a month or so after he said this, in March 2009, he left his body. (Please ClickHere to read an inspiring note on Sri Natesan) When I think of Sri Natesan, I always feel happy and I also feel that I was fortunate to come in contact with him, a man who lived a complete life.

The aim of this blog is to introduce the works of Vasishtha Ganapati Muni. In this blog I have given the links from which one can download the Collected works of Vasishtha Ganapati Muni, published in twelve volumes by the Ramanasramam, Thiruvannamalai.And again I am grateful to V.S. Ramanan, President of the Ramanasramam to give the permission to upload the Collected works of the Muni and share with others.

Time to time I will be posting many interesting information about Vasishtha Ganapati Muni's life and work. So please keep visiting the blog page.

I would appreciate if all those who are downloading the volumes can give me their contact details. This will help me networking people connected with Sanskrit and interested in the writings of the Muni. Also it will become easy for me to be in touch with them and inform about other activities conducted by us with regard to the life and works of the Muni.

Thanks
Sampadananda Mishra
Posted by Unknown at 06:01 5 comments: 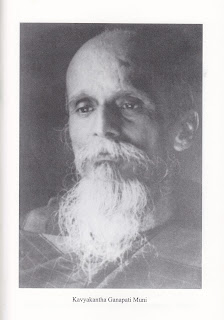 Vasishtha Kavyakantha Ganapati Muni
(From 1878 -1936)
The Muni was the first and foremost disciple of Bhagavan Ramana Maharshi. He was born on the 17th November of 1878 in Kalavarayi, a small village situated in the Vizag district of Andhra Pradesh. He was a mighty spiritual personality with a vast knowledge of Sanskrit. A yogi, poet, philosopher, critic, scholar, an eloquent speaker, an ardent devotee of Mother India, he never deviated from his goals: the attainment of India’s freedom through the power of tapas; revival of the Vedic teachings. Thus he did intense tapasya to reach his goals. He untiringly endevoured to reveal the inner significances of the Vedic hymns, and believed that the future of India rests on a complete revival of the Vedic truths.
Following is an autobiographical sketch gathered from some letters written by the Muni to his disciples:
“My father’s name was Narasimha Sastri. My mother’s name was Narasamamba. My elder brother was Bhima Sastri. Not that he knew the Shastras, he simply bore the name of his grandfather, who wea well versed in the Shastras. My sister was Annapurna. My younger brother Sivarama was taken in adoption by my uncle Prakasha Sastri. Sarveshwara Sastri was my another uncle. His son Suryanarayana was elder to me in age. We have the surname of Ayyala Somayajis and belong to Kaundinya Gotra. As the clan of Kaundinas is known as  Vasishthas, I call myself as Vasishtha Ganapati.” (Adopted from the book Bhagavan and Nayana by S. Shankarnarayanan)
All those interested to know more about the life of Vasishtha Kavyakantha Ganapati Muni can read the following books:
Vasishthavaibhabam of Kapali Sastri,
(The book is entirely in Sanskrit but now it is available with English translation by SR Leela under the title Glory of Vasishtha Ganapati. This book is published by Sri Aurobindo Kapali Sastry Institute of Vedic Culture, Bangalore)

Nayana, A biography of Ganapati Muni by G. Krishna

Here is a link to a write up by Sri K. Natesan in which he gives a very elegant introduction to the life and works of the Muni. 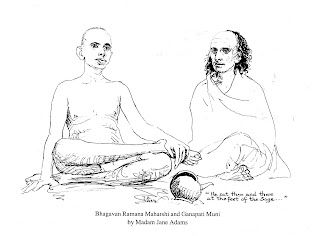